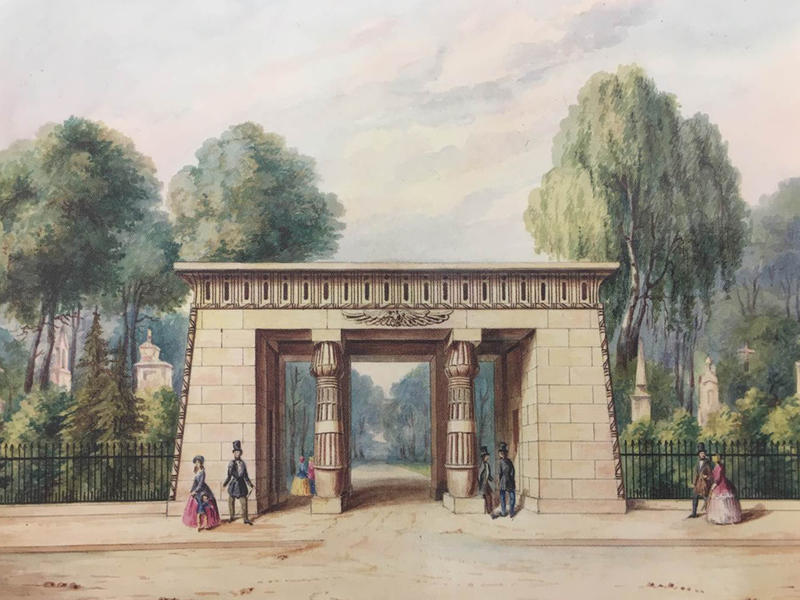 When you walk through the Grove Street Cemetery, take some time to look at the handsome trees and plants as well as the monuments with famous names. Listen to the leaves and birds, meander in the dappled shade, and take in the fragrance. Grove Street is truly an oasis (definition: a green area in an arid region; a refuge) in the outer ring of downtown New Haven. Entering through Henry Austin’s Neo-Egyptian gateway you may be struck by the abundance of trees, shrubs, and flowering plants of many kinds. In fact the entire 750-foot-long planting bed behind the cast-iron fence on Grove Street was always reserved for plantings, not burials.

In the lore of cemeteries, this decision is attributed to the idea that living things should be recalled in the ‘city of the dead’ and in fact in many communities, planted cemeteries predate – and set the tone for – the first parks. Even in the early phases of development, James Hillhouse was concerned with the appearance of the cemetery and wrote that he thought Lombardy poplars and willows would be appropriate. Early nineteenth-century horticultural literature also promoted evergreens as the appropriate ‘signature’ plantings to characterize cemeteries, as had been done in Britain generations before. (Austin’s watercolor rendering of the gateway and flanking fence shows the space filled with a variety of plants.)

Although no tree in the cemetery is original to the 1796 date, there are a few handsome huge old trees which date to at least the middle of the nineteenth century, when money was collected to fund the wall and planting beautification, such as the big horse chestnut on Maple Avenue. Note a number of the major trees have identifying tags and a handout is being updated describing these.

Over the decades, as many of these trees have succumbed to advanced age, disease, and storm damage there have been periodic efforts to replace them. The Proprietors and Friends of the Grove Street Cemetery have raised funds and implemented replantings a number of times. In 2002-03, working with Ballmori Associates, a plan was developed adding two dozen gingko trees and several thornless honey locusts (Gleditsia), planted on Myrtle Avenue and Central Avenue, respectively. A good stand of locusts already shaded Central Avenue and the new ones were added to this graceful alleé. Gingkoes were chosen because they are a handsome, enduring, pollution-resistant tree, associated with sacred temples in their native China. It has lovely small fan-shaped leaves which turn a brilliant yellow in the fall – another good season to visit the cemetery and take in its beauty.

Unfortunately we are now losing all our ash trees, the victims of an imported Asian pest beetle, recalling the loss of elms in the mid-20th century. Replacements of other species have been provided at one such location and others are being planned to fill these gaps in the tree canopy.

Different species throughout the cemetery provide ever-changing seasonal landscape interest. In addition to the many fragrant spring-blooming trees and shrubs such as serviceberries, crabapples, and cherries, there are distinctive fall foliage displays and an unusual number of evergreens, including some rather rare species such as the Sawara false-cypress (Chamaecyparis pisifera), near the corner of Spruce and Myrtle Avenues. There are also a few unusual plant varieties – try to visit in the spring when dogwoods (Cornus) are in bloom and find the tree on the corner of Myrtle Path and Maple Avenue which is an unusual double-flowered variety.

On Magnolia Avenue, the genus name Magnolia offers several species of different smaller magnolias (varieties stellata and soulangiana), as well as examples of evergreen magnolias (M. macrophylla), a tree more often seen in the South with great luscious perfumed white blossoms in the summer and slick green leaves all year. There are Blue Atlas Cedars (Cedrus) on Cedar Avenue, though plants on all the avenues are not exclusively devoted to the pathway names.

At the front Grove Street cast-iron fence, the planting bed is in the midst of a replanting renovation. A more naturalistic flowering shrub border involves removing some of the overgrown and misshapen shrubs, but keeps a number of the better plants as well. The easterly half now includes various new viburnums, rhododendrons, andromeda, lilacs, serviceberry, sweetshrub, and magnolias, planted in 2017. The western half is anticipating a similar upgrade in 2018 as funds are raised.

Many family plots have also been individually landscaped and are lovely, especially in the summer and include spring bulbs as well as perennials. A few of the oldest family plots feature ancient yew shrubs, associated with burial grounds since Roman times and before. Feel free to walk into this oasis, take in the many plant and foliage forms as they provide fragrance, shade the walks, rustle in the wind, and attract birds in all seasons.